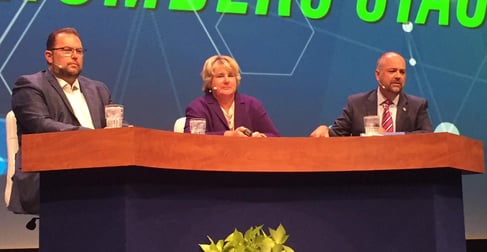 At the American Trucking Association's MC&E Conference in Orlando, FL this week, it was announced that 2017 will be a new high for the ongoing shortage of CDL drivers.

The ATA's chief economist, Bob Costello, noted that the driver shortage would hit an all-time high of 50,000 drivers in 2017.  By 2026 it could reach as many as 175,000.  This message was delivered during a panel discussion that included Derrick Leathers, President & CEO of Werner Enterprises, and Rebecca Brewster, President of American Transportation Research Institute (ATRI).

In addition, during the conference, ATRI released its annual report of the Trucking Industry's Top Concerns.  Each year ATRI surveys thousands of trucking executives to gauge the top ten critical issues facing the trucking industry.  For the first time in nearly ten years, the driver shortage is the top-ranked concern. Access the newly released report here.

Although the challenges the industry faces in addressing this driver shortage are daunting, carriers can set themselves up to outperform others by ensuring they are using the best, most efficient processes for recruiting, hiring, and qualifying drivers.  DriverReach enables drivers to easily complete a mobile-friendly DOT application, and carriers can improve their speed-to-hire with cutting-edge applicant tracking and CRM tools.  Schedule a demo and Hire. Better. Faster with DriverReach.

While it is tough to believe, we are nearly halfway through 2022. If your recruiting year has been f...

Regardless of how you entered into the world of driver recruiting, it probably had something to do w...

The Biggest Barriers to Speed-to-Hire in Driver Recruiting

In many professional industries, recruiters are asked to take their time with new applicants, comple...

3 Driver Recruiting Best Practices to Put in Place Before 2022

The past year has been a notoriously tough one in the recruiting world, especially for CDL driver re...

Webinar Q&A: “Driving the Next Generation Into Trucking”

Did you have a chance to attend our recent webinar, “Driving the Next Generation Into Trucking?” We ...

The trucking industry is facing a difficult challenge: a supply of truck drivers that can’t keep up ...