Insights: Compliance - The Criminal History Question and a Conditional Job Offer (Part 1 of 2)

Over the past few years, a relatively obscure civil and human rights movement has taken root throughout the U.S., and it has resulted in the adoption of what are commonly called ‘fair chance policies’ that have changed both government and private-sector hiring practices.

This movement is led by an organization called ‘All of Us or None’ that fights for the rights of formerly or currently-incarcerated people and their families.  The fair chance policies promoted by this organization are found in State and/or local laws that require employers to delay criminal history inquiries of applicants until later in the hiring process (i.e., usually after a conditional offer of employment is made).

These policies also typically include guidelines requiring employers to consider, (1) time passed since the criminal offense, (2) whether the crime is related to the job position, (3) evidence of potential rehabilitation, and (4) transparency standards for background checks to protect applicants from arbitrary treatment during the hiring process. 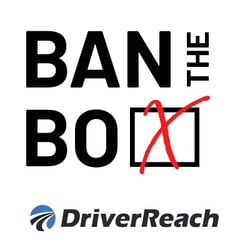 Probably the most commonly known fair chance policy is referred to as a ‘Ban the Box’ law.  This type of law, now in place in 30 States and more than 150 cities and counties, requires employers to remove the check “box” along with the typical ‘Have you ever been arrested or convicted of a crime?’ question from an employment application.  However, these laws don’t completely ban criminal history inquiries. They simply move them to a point later in the hiring process—typically after a conditional offer of employment is extended to the person.

DriverReach decided to remove the question and the check “box” from the initial DOT application entirely, opting to not only comply with the letter of the law in 10 (and growing) States, but also honor the spirit of the law in the remaining 40 States without applicable Ban the Box laws. This decision removes compliance risk for carriers, but also makes it easier for drivers in the early stages of the application process.

Note: If you’d like to read more about this topic, in April 2018 we posted an article summarizing California’s recently adopted Ban the Box law.

Stay tuned for Part 2 as we define the conditional job offer and clear up the legal ramifications related to the criminal history question on the DOT Application.

If you have questions about fair chance policies or, more specifically, about the CA Ban the Box law, contact DriverReach’s regulatory expert, Dave Osiecki at dosiecki@scopelitisconsulting.com.

Why Your VOE Process May Be Hurting Your Bottom Line

As a recruiter for CDL drivers, one of your primary obligations is to ensure that all the individual...

One of the best parts of ending a year is seeing all the positive growth and accomplishments of the ...

Did you have a chance to attend our recent webinar, “Breaking Down The FMCSA's Upcoming ELDT Mandate...